'Stimulation' is a generic term used to describe the process of increasing a well’s productivity through a specific type of operation. Hydraulic fracturing or acidizing are two commonly used stimulation techniques. Both processes are technically challenging requiring extensive engineering and analysis beforehand to determine the appropriate type of stimulation treatment, the best chemical system, and the maximum pressure and fluid injection rates. 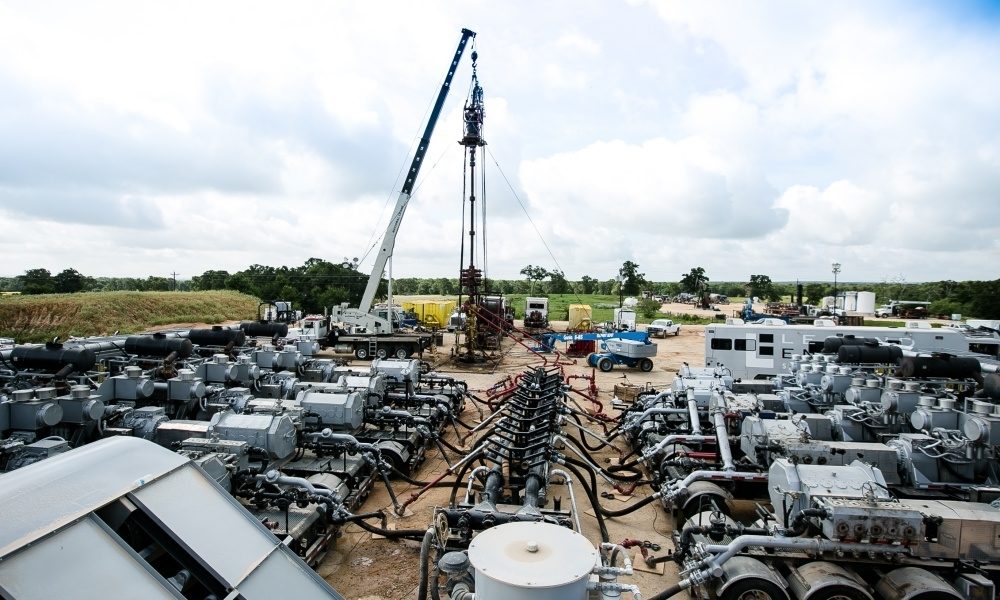 The key difference between hydraulic fracturing and matrix acidizing stimulation treatments, is that the downhole pressures involved in hydraulic fracturing are sufficient to crack the formation rock; acidizing stimulations typically require that the injection pressures and rates are kept low enough that the acid is forced into the pores of the rock without cracking the formation rock.

In the case of hydraulic fracturing extreme pressures may be required (up to 20,000psi) and therefore equipment ratings must be suitable to withstand such pressures. Over 95% of the wells drilled in Canada and the US require some form of stimulation to obtain economically viable production levels.

Hydraulic Fracturing - This method of stimulation is the process injecting high pressures fluid (typically produced water) into the formation at rates faster than the fluid can ‘leak off’ into the rock. The combination of the high rate / high pressure fluid injection puts the rock into tensile loading. The tensile load is sufficient to 'fracture' the well bore rock and thus create flow channel' for the well fluid to flow through. The last stage of the fracturing treatment involves injecting a sand slurry into the newly formed cracks. The sand in the slurry is called proppant. The 'proppant' holds open the cracks once pressure has been removed thus maintaining the well flow through the 'fractured' formation.

The 'proppant' used in hydraulic fracturing is usually a fine grade of sand 'sized' to the reservoir conditions and post 'frac' cleanouts are normally required for the 'proppant' which did not enter the rock or which was flowed back into the well after 'frac' pressure was removed. Coiled tubing is typically used for post frac well cleanouts.

Most wells in North America are horizontal wells with laterals as long as 10,000m. Up to 200 ‘fracs’ are placed along these laterals within a single wellbore. Wireline and coiled tubing are used to position and remove pressure barriers along the wellbore to isolate each frac stage during stimulation operations.

The equipment used in hydraulic fracturing is largely surface mounted although 'frac' operations can be conducted through coiled tubing or a 'work string'. Alternatively, the fracturing treatment is pumped down the annulus between the workstring and the casing.

The most common reason to acidize a well is to remove near wellbore damage caused by drilling mud, incompatible well fluids, bacterial sludge, or mineral deposits within the perforations.

In carbonate reservoirs, acidizing is also used to stimulate the formation. Acid is pumped into the wellbore at carefully controlled injection rates and pressures so that the formation isn’t fractured. This technique involves forcing the acid into the pores of the rock to create a network of wormholes. As the injection pressure drops, fluid diverters such as foamers are added to force the acid to create new passages within the rock. Similar techniques are also used in sandstone formations using an acid blend containing HCl and HF. Sandstone formation acid stimulations are more complex than acid stimulations of carbonate reservoirs and must be carefully engineered and executed at the field level.

The risks of further damaging the wellbore through poor deployment methods, incompatible chemicals or acid are great and therefore the reservoir conditions and the type of damage must be carefully assessed. Incorrect acid blends can react with drilling muds to create an immiscible sludge that plugs up the pore throats of the formation rock. Generally hydrochloric acid is the most commonly used chemical for this type of operation and is usually deployed as a 15% or 30% solution and designed for maximum 'contact' time to react suitably with the formation. Synthetic acids have become more mainstream due to reduced potential for injury should human contact occur.

The equipment used is surface mounted and acid treatments are often conveyed through coiled tubing or a 'work string'. Inhibitors are added to the acid blend to protect the pumping equipment, work string, and wellbore tubulars from corrosive effects of the acid.